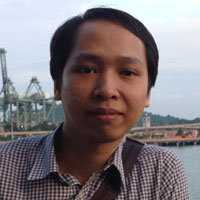 Pyae Phyo Myint Soe
About Me

My nickname is p2ms, was born and grown up in Myanmar, but currently working in Singapore. At present, working as a programmer, in one local company mainly for native mobile applications (mostly with Swift, Objective-C on iOS). Sometimes, I work on Android application development (Java, Kotlin), front-end development (using HTML, JQuery, SCSS, ...) and backend web application and services (Ruby on Rails, J2EE, ...).

My research interest is in the field of computer vision and machine learning. In my spare time, I like to learn about algorithms, maths, statistical methods and the nature.

Early days in my Life

I grew up in a port town in delta region of Myanmar. Back in my childhood days, my dream was to be a scientist who creates the humanoid robots. This was the inspiration revealed from science and economic magazines I read. Just simply loves how science and technology transforms the way we live.

The Road to Programmer

My first exposure to computer is quite late. My first day in computer college was the very first time I had been seen a computer. I had been introduced the small C/C++ programs in my early collegiate life. My lecturers trained steps by steps how to visualize, debug and trace the program in my mind. These programming sessions were horrible to me for first few weeks. It started writing small programs on paper. Most of the nights I spent thinking of the underlying reasons of these text lines by looking at the sample programs in textbook, gradually I realized the art of thinking process in programming.

Afterwards, the programming session were the best lectures and be no longer threats on me. Addicted to programming until writing a program was the only purpose to use computer during these days. Our lecturers improve student’s programming skills by asking to write arbitrary programs on whiteboard on the spot in front of the class and analyse from different views for its efficiency, robustness, reusable, scalable, modularity and other good practices in programming. I used to write some programs in my mind and always finding chances to test and debug them. I had also been introduced Assembly, VB and VBA and later Java language by self-learning.

Throughout my university life from first year to final including honours year and course work terms in Master degree provided me the concrete knowledge for understanding and implementation of MIS, PM, DBMS, OS, SE, CG, algorithms, data mining and modeling, multi-agent system, compilers, hardware/system architectures, basic electronics, micro programs and others related subjects. Some became my research interest later. Of course, most are easily to forget if not keep in touch with but the sound knowledge enable to easily adapt and conceptualize in short time.

I joined a local game studio purely writing games using DirectX on Windows platform. Then, I went to study at AIT in Thailand where web development became part of my programmer life. I started working on PHP and front-end development. For me, coding for web is quite easy and fast to develop. Apart from this, I also wanted to step into easy and new things from desktop environment. I took the web application engineering course and developed projects using Ruby on Rails. Meanwhile, some other projects were going on C++ (with OpenCV and OpenGL) and Java.

My life in Singapore started as a Ruby on Rails developer at a small startup web and mobile applications company. As a lean company, only a designer, two business development and marketing personnel and a developer are working as a team to implement the projects. Therefore, I need to get involved the projects ranging from requirements to final products and have responsibility for every technical aspects. The early projects for Iphone development were trying to use lua with Corona SDK as it clean and easy to write but not efficient and faced problems in using system APIs. Therefore I switched to Objective-C on XCode. Despite I worked mainly on mobile development, I developed the accompanying backend system and web services required by some projects. ...

The main purpose of this site is to allow me connecting other people with same interests, sharing thoughts and knowledge I have learnt and partly encourage me to keep learning and keep working on my research interests.

This site is hosted on () DigitalOcean Droplet, powered by Ruby on Rails on top of Nginx + Phusion Passenger and () MariaDB. I will upgrade it to larger instance and extend volume when the site becomes bigger.